Procaine is a local anaesthetic - an ester type - which is used as a local anaesthetic very seldom today, since much more effective and more deeply penetrating substances like for example lidocaine are available, where allergic reactions are less occurring. However, procaine is still used in the neural therapy, a type of treatment from the areas of alternative or animal medicine.

Relatively new is the discovery that procaine can block the enzyme DNA methylation. This circumstance can be drawn on in order to reverse paragenetic damages of the gen expressions. This is especially interesting with damages of the so called tumour suppressor gene like p53.

The shown particle size distribution was measured with the ANALYSETTE 22 with a small volume dispersion unit. As a solvent hexane was used since procaine is soluble in water and also in methanol. Prior to the measuring, a suspension of hexane and small amounts of a surfactant were pre-dispersed in an external ultrasonic bath. 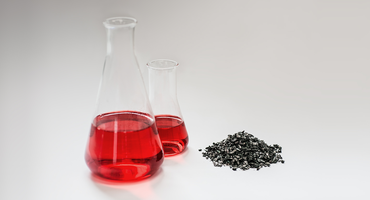